A downloadable game for Windows, macOS, and Linux

a multi-genre music videogame reflecting on what we do in games & having no comfortable place outside them.

This game wasn't fun... It was beuatiful. The music was lovely including going through it, even if it's so short I honestly loved it!

why do you have to let devs personally know when you trash their games lol, there's probably better ways of self promotion. at least the way I look at it - I also write about freeware and I have written a rare negative review, but I try to keep them measured and interesting, and I make it a point not to confront the developers with my criticism. I've played games I've greatly liked and others I've exhaustingly disliked where it's incredibly obvious that the devs did not do their best work. and so I'm always concerned about the overall utility of my writing, trying to ensure my writing is about what the game can do rather than just if it's good or bad. if nobody has heard of the game, is it even worthwhile to make insular observations that only venerate myself as a kind of tastemaker? does that have a positive effect? will that help the culture?

I'm not necessarily bothered by the criticism, because I know what I made and I know what I have to do in order to make a game in only a month. I'm influenced greatly by abstract expressionism and minimalism, yet I recognize these are not popular or welcomed styles in videogame art.

however, I am extremely bothered by how that review dehumanized me, and how made it seem like I was a bad, and even dangerous person, for trying to express something that's hard for me to express.  this game is representation of a couple of bad days. I am not a bad person for having days of weakness. to write or act as if I am, that my inability to appeal to reason is a danger, I think overall increases the stigma of MI, because I've never found MI to be something comprehensible or logical. I don't think the purpose of my work, or my life even, is trying to get the most people possible to understand what it's like to have MI. I just wanted to make something like, if you can feel this, I do too. you're not alone. the reason the game is concerned with portrayals that are suspended, rather than conclusions or resolutions, is because there is no cure, there is no end to depression. there's just coping and treatments. there are always good days and bad days. I can't reason them away, I still don't fully understand why I can feel like shit after I accomplish my goals or have an amazing day. I just live with it

my truthful feelings are closer to anxiety, fear, paranoia, self-hate. part of my brain is convinced I'm a bad person and will use selective bias to latch on to any scraps in order to reinforce that. this circumstance of mine is of course not your fault, but it is often the reality for people with depressive or anxiety disorders, and to throw a sufferer under the bus somehow to protect all of the others who have depression is a contradiction. either you're here for anyone who suffers the illness in any messy way (which in my experience, being friends with others with MI, is most people), or you don't care. and again, I do not mind the natural course of someone not liking what I've made. I can reiterate, I wouldn't be replying if it was just a review of my game. I'm replying a second time because I don't care about the art at this moment. it was your ignorant comments on depression & insults to my person that had me talking about MI specifically. I wasn't trying to defend the game. if it is really not your goal to not put down people you don't know, please, in the future, stick to writing about the game, do not speculate about the developer's lives in your review. I don't believe that's the job of a critic. I find no difficulty in expressing what I think is wrong or harmful about a text without saying the author themselves is lacking or a dangerous person, because there's no actual way I could know that just by playing a game of theirs.

Loved this so much! Really striking and thought provoking.

Emotional and genuine, just as long as it needs to be. Amazing little artgame.

saddening and inspiring all at the same time...thanks for this 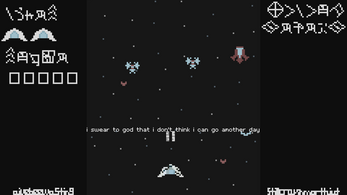 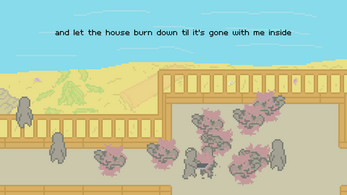 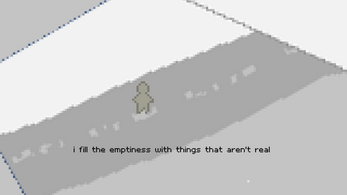